Icing on the Cake! 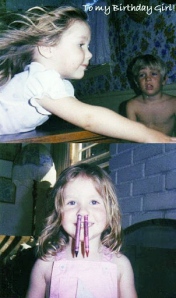 My littlest one arrived a couple of weeks before Christmas–29 years ago this week.  And what a present!

After having two boys first, I was really surprised to learn that boys and girls really are different… her personality was a treat that arrived with her, with absolutely no pink or blue coaching.  She has been herself from day one with a delightful yet outspoken way.  She was a content baby with a ready smile and very sociable.  She would quietly take take in all that was going on around her rather than being extra cuddly.  Even at pre-school, the older children used to run to greet us looking for Jenny as soon as we arrived.  All three of my children thrived at this wonderful pre-school in Los angeles, at the B’Nai Tikvah Temple.

She’s the one who because of her winter birthday attended a local Lutheran church kindergarten rather than  public kindergarten–because the public school said she was too young (within a couple of days of the cutoff date, sigh)–while with two older brothers and being very social we knew she belonged in school.  And she did; and thrived.  Her very first day of Kindergarten, lunch box in hand, she bolted from the car and ran to the door, turning back just long enough to say “Bye Mom” — and left me teary eyed at the curb!  But this also summarizes Jenny’s personality–a zest for life!

I wish our world could be filled with more young women like my daughter.  She’s beautiful, smart, charming, funny (a natural sense of humor–see the photos), very organized, hard working, loving, and patriotic.  What more could a mother ask?

First signs of her strong spirit and strength surfaced really early… the best example I can recall happened when she was about 4.   We had spent an afternoon at the beach and were walking back.  We usually took the walkway that angled along a steep incline to street level but this day we climbed through the ice plant up the steep sandy dune.  Jenny slipped in the sand and slid a couple of feet much to her annoyance.  Several teens walking behind us(oblivious to us) had the unfortunate timing of laughing at something they were discussing.  Jenny assumed they had laughed at her spill.  Well–hands on hips, then one accusatory finger pointed their way–and she absolutely let them have it!  “Don’t you stupid people laugh at me!” came the booming voice from my adorable and sweet 4-year old miss.  What surprised me most was their response!  They were apologizing, as though not apologizing would have dire consequences!

We still tease her about “the look,”  the one that flashes across her eyes; the one that involuntarily signals the observer they have crossed a serious line.  Be afraid, be very afraid!

I love you and I love “the look.”   To my little one who is now a wonderful young woman, all grown up, professional, and married to the most wonderful guy.  I wouldn’t change a thing about you!  You will always be the Icing on my Cake!  Happy Birthday, Jenny!

AdProse is a small, home-based web design service--just me!
View all posts by gailyeaple →
This entry was posted in Uncategorized. Bookmark the permalink.